How I came about Tomb Raider 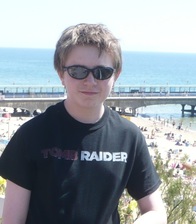 Me in my Tomb Raider shirt
Hiya! My name is Jason and thanks for checking out my site! I am one of the younger Tomb Raider fans and started playing Tomb Raider at a very young age. My father was interested in The Last Revelation, his first Tomb Raider game, and liked it so much he decided to but the first Tomb Raider and continue from the start. I remember my brother watching my dad play through TR1 and debating with him what to do or where to go next. I seemed quite interested too and watched as well. We would both put up our chairs next to the computer and watch my dad play the games. My brother wasn't as interested though as he grew up. Me however, I was hooked!

My father would go off to cook dinner or something and I would watch Lara rock her head backwards and forwards before I realized the game was waiting for me to play it. I was very young at the time so it took me a while before I worked out the controls and found our after about 9 times that spikes could kill Lara. It was fun, nonetheless.

Soon I started obsessing over it. I still have a small Lara figure we got out of a cereal box years and years ago. I have that as my fondest and first memories of Lara. Although I do remember playing in the jungles of TR3 with the monkeys. 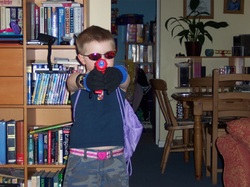 My 7 year old cosplay
Around the age of 6 and 7 I got my Playstation 2 and played all of the Tomb Raiders on it non stop for hours. The first game I got for that console was Tomb Raider Legend so I'd say that was my first Tomb Raider game that I played and learned for myself.

I also came across many other members of the Tomb Raider community, and this is where I am at the moment. Since I joined the community in 2012, I have since met many lovely people and I am now an amateur cosplayer.
Lara Croft and Tomb Raider are trademarks or registered trademarks of Square Enix Ltd.