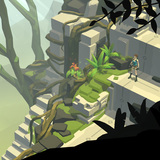 Square Enix Montreal, the studio behind the successful mobile games Hitman GO and Hitman Sniper expanded the "GO" universe by bringing archaeologist Lara Croft into a brand new mobile platformer unlike any environment we've ever seen Ms Croft in.

Lara Croft is out in search for an ancient artifact known as The Atlas of Beyond, hidden deep within the catacombs of a tropical jungle. Lara must find several keys to open doors to mazes where she must fight her way past snakes, lizards, spiders and even a threatening basilisk monster protecting the artifact. Lara narrowly escapes the collapsing tomb before swan diving into the tropical waters below.

I don't normally review the Tomb Raider or Lara Croft games but given that I was invited to London a couple days before the release of Lara Croft: GO, I thought it a perfect opportunity to review this gem of classic Lara action released on August 27th 2015.

I had had some struggles playing the game as playing the game on my Samsung tablet resulted in missing textures on Lara, her enemies and the menu system. I am not the only one to have this problem, but given that this is a result of my particular tablet and not to do with Android or the game itself since it's work perfectly on another platform I use, I won't hold it against the game itself or SEM.

If you want to read my full review of the game click here.