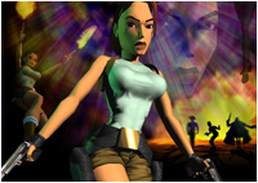 The very first Tomb Raider was released in October 1996 and made by a small company in England called Core Design. The idea for the game was to have a character run through Tombs and ancient temples collecting artefacts on their way. The character was originally a male lead role, but was soon changed to a female, for looking too much like Indiana Jones. Sketches of a South American woman named Laura Cruse came up, but Core Design wanted a UK friendlier name. Here came Lara Croft, soon to be world phenomenon.

Lara Croft is hired by Jacqueline Natla, a business woman who is interested in a strange artifact called the Scion of Atlantis. Lara sets off to Peru to find it in the Tomb of Qualopec, having to deal with wolves, bats and even dinosaurs! Once she retrieves it she is betrayed; Natla sends Larson, an old annoyance of Lara in the past, to kill her. He later informs her that she only has a piece, the rest of the relic hidden in the tombs of the rulers of Atlantis. It is up to Lara Croft to stop Natla from using the artifact to rise and army of mutants.