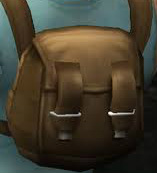 The most handy of all of Lara`s tools and weapons is the backpack. Found when she was only at the age of 16, Lara wore this for many games until The Angel of Darkness when the Police set a few dogs on her who bit it off. The backpack is most suited or refered to as the inventory, and many fans suggest that because it can hold many things in it, it belongs to Mary Poppins.

Just like the Grapple gun in Tomb Raider Chronicles, the Grapple has many advantages in the Crystal Dynmacis games including crossing large ditches, pulling objects out of the way, triggering switches and wall running.

Used in many of the Core Design games, the crowbar is used on many occasions for things like opening hidden passeges, removing items from walls and even hitting a chef on a war ship over on the head!

PLS (or personal light source) replaces the Core Designs flairs and is unlimited until it starts to overheat and automatically turn off.
The torch is an upgrade in Tomb Raider Anniversary that you can flick on and off if you are playing on the Wii.
Flares are a big addition to Lara`s backpack and are used in every single Core Design game except for the Angel Of Darkness and the first game. They are very handy and can light up many dark areas. Unfortunately however they don`t last very long so sometimes you have to chose the right moment to light them. 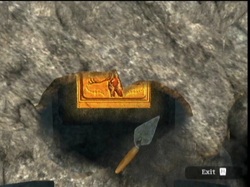 Restricted to Wii players on Tomb Raider Anniversary, the Tool kit is a fun useage of using the sensored Wii remote. It can help solve puzzles, make chalk drawings and draw pictures in sand. The Items in the Tool kit include, a pickaxe, a piece of chalk, paper, a brush and a few more.
Lara Croft and Tomb Raider are trademarks or registered trademarks of Square Enix Ltd.