The Scion of Atlantis (TR1/TRA)

The Scion of Atlantis is a powerful artifact split into 3 segments in which the 3 rulers of Atlantis would hold, ruling over their part of the kingdom. The 3 were the god kings Qualopec and Tihocan and the god queen Natla. Natla betrayed her fellow brothers and turned against them to use her power of the Scion for her own mutations and experiments. Natla's brothers intended to freeze her for eternity, but centuries later she broke out, and set to rebuild the Scion again after Qualopec and Tihocan hid the fragments in their own tombs scattered around the world.

The Dagger of Xian (TR2)

The Dagger of Xian is an artifact that possess the power of the dragon; the holder will transform into a Chinese dragon once it is plunged into their heart. Italian kingpin Marco Bartoli set after the artifact for this very purpose to fulfill his father's legacy. Lara Croft is also after it, and has to stop the Mafioso from using the artifact to wreak havoc in China. 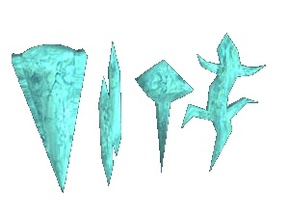 The Meteorite Artifacts were carved by Polynesians from a meteorite that impacted in the coldest regions of Antarctica many years ago. The artifacts themselves had their own unique powers, but when placed in the Meteorite Cavern (the resting place of the Meteor) it will rise up and cause the bearer of the artifacts to evolve rapidly. The original artifacts consisted of the Infada Stone, Element 115, Eye of Isis and the Ora Dagger.

In the TR3 gold edition (The Lost Artifact), a fifth artifact by the name of the Hand of Rathmore was also discovered, used by Sophia Leigh but not to it's full potential. It can generate deadly goo that can cause mutations to organisms when exposed for long periods.

The Amulet of Horus (TR4) 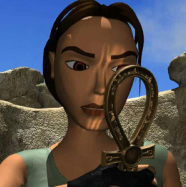 The Amulet of Hours was an ancient artefact created by the gods to seal the Egyptian god Seth in his tomb. Once Lara removed it from the sarcophagus of Seth, she unknowingly released Seth to cause havoc and destruction. This artifact can also be used to activate the assembled pieces of the Armour of Horus. Seth destroyed the pieces of armour however which made the Amulet of Horus fall into the surrounding water. After that the only use of it was to seal Seth yet again in a trapdoor. It also tells the story of Seth on the inscriptions of the artifact.

The Iris is an artifact that was discovered by Lara Croft at age 16 when she was on a private expedition in Cambodia with her mentor Werner Von Croy. Upon finding the artifact, Lara warned Von Croy of an inscription that warned vengeance on those who removed it. Von Croy ignored this and was trapped in the presence of the Isis as Lara escaped the collapsing tomb.

Decades later, Von Croy Industries acquired the artifact after Werner somehow survived. Lara infiltrates the building and seeks to steal it. Here we learn of the artifacts powers; it can teleport the holder from one location to another with the help of specific machinery. Other than that the artifacts powers and origins are a mystery.

The Spear of Destiny (TR5)

The Spear of Destiny was one of the most powerful and effective artifacts that Lara has tried to recover. She pursued it in Russia after hearing that many years ago it was found by the Nazis on a U-boat which sank due to the Spear's power. Lara then went aboard a ship as an intruder, using one of their Extreme Depth Suits to dive down to the ruins of the U-boat and collect the artifact. Lara saw first hand the power of the artifact after she was captured again, murdering the Russian boss. She thought it best the artifact was to be doomed along with the ship.

The Chirugai, also referred to as a glaive, is a weapon owned by Kurtis Trent. He used it all throughout the Angel of Darkness as his main weapon alongside his pistol. Lara finds the Chirugai in the same room as the boss fight Kurtis has with Boaz. As Kurtis killed the final form of Boaz, he collapsed after taking a hit with a dart. The Chirugai is left where his body was in a pool of blood. As Lara picks it up, the blades spin out and vibrate, pointing Lara towards the exit. We do not know if Kurtis 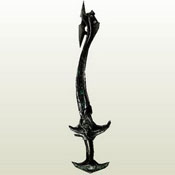 Excalibur is the ancient legendary sword of King Arthur split up into several pieces. They were designed to separate and rejoin using the Ghalali key owned by Lara's mother Amelia. Lara discovered that Rutland had a piece of the sword during their meet up in Bolivia which she soon recovered later in Ghana. In Peru, Lara found a ceremonial copy of the sword and remembered that one of the pieces belongs to Shogo Takamoto in Japan. The next was protected in a military base in Kazakhstan and the last in King Arthur's tomb in Cornwall under a King Arthur themed museum turned roadside attraction. Lara reassembled the sword in Nepal and used it as a weapon against old friend Amanda.

Thor's gauntlets and belt were the ancient armour of Thor, the Norse god of thunder. His armour consisted of two gauntlets and a belt. One gauntlet was kept in Niflheim, an underground tomb under the Mediterranean Sea which was stolen by Lara's friend Amanda Everett that Lara stole back after sinking her rival's ship. The second was kept off the West coast of Thailand until Lara's father, Richard Croft, hid it beneath Croft Manor in the crypt to keep the artifact away from Jacqueline Natla.

As for Thor's belt, when Lara found Thor's second gauntlet underneath her home, she found photos and information about locating the next piece of Thor's armour in Southern Mexico. She set off in search of Xibalba, the tomb where the armour is kept. By using this final piece Lara now has enough strength to move entire walls as the belt recharges the strength in her gauntlets, giving her godlike strength. 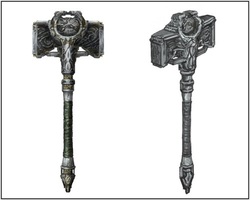 Mjolnir is Thor's main weapon that has immense power, enough to kill a God. It can only be unlocked or used when you are in possession of Thor's armour, his belt and his gauntlets. Lara packed for cold as she headed for the cold regions of Jan Mayen Island, where she removed it from it's tomb. Thor's hammer can shoot lightning strikes out of it, and Lara used it to kill Jacqueline Natla, after discovering that Natla killed Lara's father, Richard Croft. As Natla tried to revive the Midgard Serpent, a Norse weapon to destroy the Earth, Lara stopped her using the hammer, submerging Natla in Etir, leaving the hammer to burn with her.
Lara Croft and Tomb Raider are trademarks or registered trademarks of Square Enix Ltd.